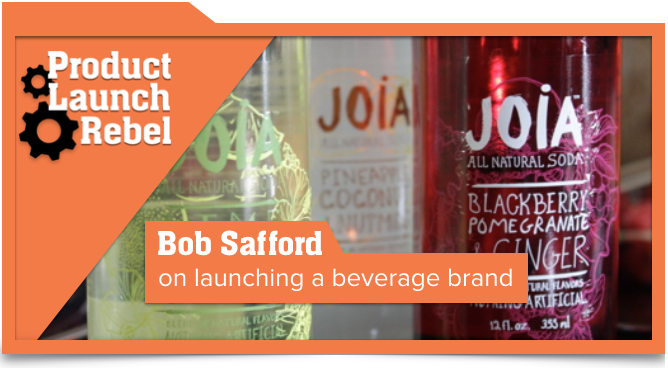 Hear Bob describe how he got serious about his business idea, how he found investors, how he deals with startup challenges, and what he has learned most about himself.

0:42 – Introduction to Bob Safford, the founder of Boundary Waters Brands (producer of the Joia All Natural Soda brand of sodas)

1:32 – Bob describes whether he’s a “creator at heart” and reflects on whether launching Joia was his destiny.

2:29 – Bob explains how he discovered the Joia beverage idea. No longer a drinker of alcohol, he was frustrated by not finding interesting non-alcoholic beverages to drink. He would often concoct his own beverages at home. The moment of inspiration came when he was out with friends one night.

4:25 – Bob shares what made him go one step further and get serious about his business idea. He describes his history of believing that he would one day start his own business. He then started networking with people involved in the beverage industry. And he met Joe Heron, the successful founder of three beverage companies, who introduced Bob to key people.

9:01 – Bob talks about what it felt like to be an entrepreneur for the first time, and having a personal connection with his product: “It’s always a great feeling to see your product out there when you’re least expecting it.”

11:49 – Bob answers a question about whether or not he took his own marketing advice when he launched Joia. (Bob was a successful marketing executive before he became an entrepreneur.) He describes how “it was a challenging construct, because I created [Joia] for me.”

13:45 – Bob describes his key challenge of having “absolutely zero leverage” when working with suppliers, even when he’s a paying customer. He explains that a startup is very different from companies that are established. He expresses his “rude awakening” and his “single greatest lesson . . . which is don’t assume you have any leverage anywhere anytime, even when you’re paying the bill.”

14:38 – Bob talks about the consumer reaction – and changing consumer tastes — that he and other food and beverage companies weren’t fully expecting.

18:50 – Bob shares the challenges as a consumer product entrepreneur, and how he’s dealing with them; the struggles of having fewer resources than a large established company, and using product sampling as the key vehicle to drive product trial among consumers.

22:08 – Bob describes what it’s like selling his idea to investors, retailers and distributors: “Challenging and frustrating.” Retailers have been the easiest because of the product’s great taste. Distributors have been more challenging because of industry consolidation. Regarding investors, he’s felt “fortunate” to have a strong network that could make small investments in his company. “When you love your product it’s pretty easy to be a pitch-man for that.”

27:17 – Bob talks about who has been most influential to him in his career.

29:55 – Bob shares what he has learned most about himself as an entrepreneur: “You better learn a way to handle stress, because it’s at unprecedented levels.” “Things don’t go smoothly . . . it’s a tough world.” He offers his advice on distinguishing the most critical success factors of the business – the one or two things you really need to worry about.