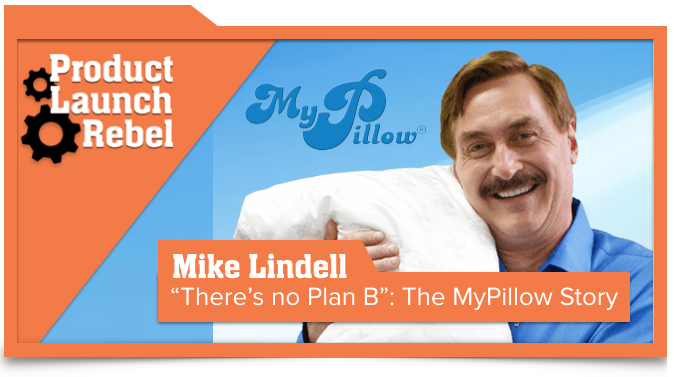 Hear the extraordinary success story of Mike Lindell, the Founder of MyPillow, Inc.

Learn how he overcame a deluge of rejection, legal mistakes and drug addition to rapidly grow into a $500 million dollar company. Discover how he ignored “expert” advice to manufacture his product overseas and, instead, created a U.S.-based factory that now employs nearly 1600 employees in his state of Minnesota.

0:46 – Introduction to Mike Lindell, the Founder and CEO of MyPillow, Inc.

3:18 – Beginning of the “Give Me The Basics” Podcast Segment

3:30 – Mike talks about why he saw a new pillow concept as a business opportunity.

4:26 – Mike talks about being in business for 13 years and whether he thinks the time went by fast. “My expansion seems so surreal.”

5:08 – Mike explains what makes his MyPillow concept so unique.

6:28 – Mike talks about the types of products offered from MyPillow.

7:07 – Mike talks about the uniqueness of the MyPillow concept and how his initial assumptions about the business changed in the early days. He explains how he had to offer strong guarantees and then “guarantee with everything I had.”

10:03 – Mike explains his rationale for manufacturing in the United States (Minnesota) instead of seeking an overseas manufacturing partner. “I micro-manage that way, I’m built that way . . . I think a lot of entrepreneurs are.”

11:51 – Mike talks about the number of prototype iterations (94) he did to arrive at the concept that he felt confident about. “The excitement was beyond belief.”

12:43 – Mike talks about the pillow fill options he tested as he developed the concept, and working with engineers, and tearing “hundreds of pieces by hand” to make it work. “I had a lot of divine interventions.”

14:23 – Mike advises inventors to put themselves in the shoes of the consumer when they develop a new product. By listening to consumers, it helps inventors add the right features to the product. After that, “the money takes care of itself.”

16:42 – Mike talks about who did the original pillow sewing, and where they produced the pillows. He further explains the constant rejection they received from major retailers when he presented the product to them.

17:39 – Mike recalls some of the early issues they had when they first manufactured the product. “Yeah, I made them the wrong size.” “I made my first 300 pillows – when I was out of money – I made them too wide and too long.” “That was scary.” So he sold them as a “very special limited edition.”

19:01 – Mike talks about how, early on, he approached retailers to sell the product and the constant rejection he received. “I knew I had a great product.” They advised him to try selling the product in a kiosk in a mall. The kiosk didn’t work well, and he spent a lot of money doing it. But a key customer introduces Mike to a big idea: home and garden shows and fairs.

22:30 – Mike explains how they did the home and garden shows “for years” and how customer enthusiasm kept him going during those struggling periods. From there he had the idea of doing an infomercial. And his first infomercial was his first big positive turning point. From there MyPillow “went from five employees and my kids to 500 employees in 40 days.” “We were the number one infomercial by the end of 2007.”

26:32 – Mike shares his state of mind going into producing the first infomercial. He talks about how he “just knew” that the infomercial would be successful.

29:16 – Beginning of the “Let’s Get Personal” Podcast Segment

29:37 – Mike talks about his core motivation to being an entrepreneur. “There’s no plan B.” “It’s good to have a mentor – a trusted mentor.”

31:33 – Mike talks about the one thing he would do over again: to get good legal advice.

32:07 – Mike considers his number one personal strength: “I think it’s the passion – having a passion behind everything you’re doing.”

33:01 – Mike talks about whether he ever envisioned himself to be the CEO of such a fast-growing company. “It doesn’t surprise me, I’ve had other miracles throughout my life.” “It’s surreal but not surprising.”

33:38 – Mike talks about how his faith has been at the heart of everything he does, especially since he surrendered to stop his addictions. “I have quite a history.”

35:49 – Mike talks about whether it was his destiny to start and grow MyPillow. He goes on to explain how MyPillow has become a platform for something bigger. “I think it’s destiny . . . I’m glad I made the right discernment and didn’t give up on the MyPillow because it was just a platform for a bigger thing that’s coming.”

37:12 – Mike considers how some of his family and friends look at him differently now that he’s successful. “This isn’t me, this is God [that has made him successful].”

38:56 – Mike talks about what has brought him the most joy along his entrepreneurial journey. “Helping people.” “It’s been just so rewarding.”

40:02 – Mike talks about his top frustrations – how many people tried to take his company, and the betrayal that he has experienced. “It’s been very hard for me.”

40:56 – Mike talks about how he never had any real self-doubt regarding the MyPillow concept.

41:45 – Mike expresses how starting MyPillow might have changed him as a person. “I don’t know if it really changed me – I’ve always been an entrepreneur.”

42:50 – Mike talks about what he’s learned most about himself since starting MyPillow. “That I can keep that passion for a long time.”

43:10 – Mike talks about who has been most influential to him: “I would have to say God.” And Mike talks about other entrepreneurs that he has looked up to. He goes on to say that “there’s nothing better than the trenches” and getting direct customer feedback.

46:13 – Mike offers closing advice for aspiring entrepreneurs: “If it’s a product, make sure you get a provisional patent.” And “learn from other people in the business” and “get that legal representation in the beginning.” And finally, make sure that “whatever you have, look at it from the customer’s point of view.”

← Ep. 026: How to Launch in the Natural Products Channel — The Bob Burke InterviewEp. 028: On Launching a Ski Company and Movement — The Matthew Sterbenz Interview →