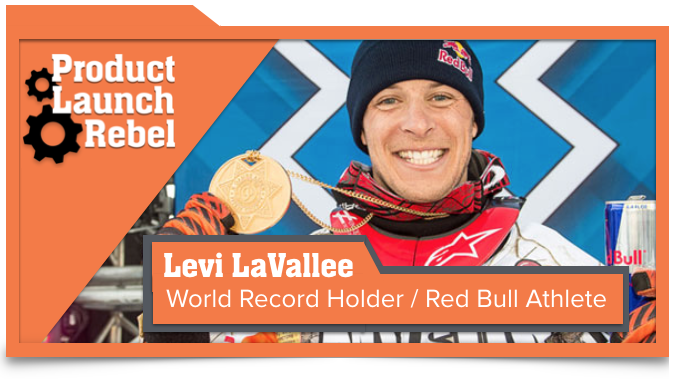 Hear how 10-time X-Games medalist, Levi LaVallee, went from small-town snowmobiler to elite athlete, world-record holder and entrepreneur by conquering fear and competing against only himself.

Learn how he became the first person to attempt a double-back flip on a snowmobile. And listen as he describes overcoming a life-threatening crash to becoming the world-record holder for snowmobile distance jumping.

3:01 – Levi talks about his enjoyment, growing up and living in the small town of Longville, Minnesota, and how he has built his business operation and “compound” in that area.

6:58 – Levi expresses how growing up in Longville, Minnesota, has helped make him who he was today. He describes how living there has kept him focused, honest, and void of distraction.

11:44 – Levi talks about the benefit of not letting yourself get “too soft.” And to not wait for the best conditions to work on your business or activity – and by focusing on what got you to where you are, and constantly growing.

15:56 – Levi talks about his recent self-help guru “audio book binge” and his quest for constant improvement.

19:30 – Levi shares how he first started four-wheeling and snowmobiling as a youngster and how his dad built his first jump out of a car hood. And how Levi became a professional snowmobiler at age 20.

22:00 – Levi talks about why and how he’s evolved into taking more risks as a professional athlete. He describes his father’s influence on him, and his small physical size – and not becoming “the weak link,” as a motivator.

25:30 – Levi thinks about what he would be doing for a living if he did not grow up in a snow-oriented environment, and if he never grew up around snowmobiles.

27:28 – Levi talks about who has most influenced him while growing up. He mentions Michael Jordan, the basketball pro, as a key early motivator. Other influencers included motocross racers Ricky Carmichael, Jeremy McGrath and his friend, Travis Pastrana.

32:15 – Levi talks about what he thinks is the main driving force that motivates most leading action-sports athletes. In part, Levi talks about the importance of making sacrifices to accomplish goals, following one’s passions and defying people’s expectations.

35:19 – Levi describes what he thinks is his #1 strength. “Overcoming fear.” He explains the pressures that many leading athletes face, and how that pressure can increase their fear of failure and reduce their success.

39:01 – Levi talks about the scariest experience of his career, and how he prepared for that activity. He mentions the double-back flip in the X Games “where he laid it all on the line.” He then explains the equally scary episode of preparing for the world record distance jump.

43:50 – Levi describes how he prepared his snowmobile equipment for the world-record distance jump. Wind-tunnel testing was needed.

46:02 – Levi talks about the mounting pressures that accompany a major broadcast event (i.e. the world-record distance jump and the double-back flip attempt) and why preparation is the key to following through with the goal.

49:06 – Levi offers his advice on how budding entrepreneurs can learn to deal with and overcome mistakes. “Learn from them.” “Be aware of the problem.” “Then come up with a plan, and execute.” “Have a good solid plan.” “Always think of that end goal.”

51:46 – Levi talks about his top weakness – wanting things done a certain way, and procrastination – and how he deals with and overcomes it.

55:25 – Levi explains his Team LaVallee organization and his role in it, his new coaching focus and how his career has evolved.

1:01:00 – Levi talks about the multiple activities that are involved in a world-record distance jump, including safety protocols. He talks about how it was a multi-million dollar project. And how Red Bull has been a great partner and supporter in the project.

1:05:00 – Levi describes the scary situation of his world-record practice jump, where he crashed at over 100 miles per hour. And the emotional situation that accompanied that experience. After thinking about that crash, he thought “there’s a reason I’m still here.” He then overcame that crash and planned to re-do the jump a year later, which was then successful.

1:13:48 – Levi describes his feelings at the moment he successfully completed the world-record distance jump as thousands of people cheered and celebrated. “An amazing, amazing time.”

1:16:10 – Levi talks about his weeks preparing for the world-record jump and his wondering “Is this my last day?” And how he tries to eliminate his negative thought process. “Just go do it.” “You’ve prepared, you’ve done jumps since you were four years old.”

1:19:00 – Levi describes how becoming an elite athlete has changed him as a person. “It changed me pretty significantly.” “I started realizing that sacrifice is the name of the game.”

1:24:55 – What have been Levi’s biggest joys as an entrepreneur and athlete? “The joy for me has been how much I’ve overcome . . . and the adversity.” His biggest trophy is his snowmobile from his biggest crash. It’s about “how quick I can get back to it” after I fail. And to help people based on his experience.

1:27:45 – Levi talks about his biggest frustration. “Myself. I come from a stubborn family, and I see that come out at times.” Additionally, Levi talks about the challenging transition going from athlete to team leader. “You have to be able to work with people and value the relationships.” “I am able to understand that more and more.”

1:33:33 – Levi talks about what he hopes to be his legacy. “I hope they remember me for the person that I am and that you don’t have to come from an ideal situation to achieve the things you want.” “All you need is the heart and the willingness.”

← Ep. 017: On How to Change the Face of Bicycle Apparel — The Brent Gale InterviewEp. 019: On How to Launch a Fitness Equipment Company — The Tim Porth Interview →