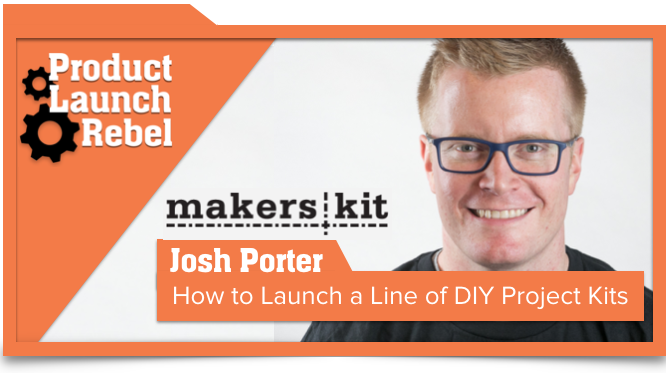 Hear how Josh Porter and his MakersKit co-founders went from zero sales to over 300,000 units sold in less than three years. Listen as he describes their unique evolution to becoming a product-based company selling to over 4000 retailer doors and in every state in the U.S.

0:45 – Introduction to Josh Porter, Co-Founder and CEO of MakersKit. MakersKit is a producer of do-it-yourself project kits sold in specialty retailer stores in the U.S., Canada and Europe.

3:02 – Josh describes MakersKit and what makes it unique. He talks about the scope of products offered and the retailers that sell MakersKit.

5:45 – Josh talks about what drives the need for do-it-yourself products.

9:40 – Josh talks about the number of retail doors they are selling to now (4,000 to 6,000). Retailers include Macy’s, TJ Maxx, Urban Outfitters, Tilly’s, West Elm, Williams Sonoma and others. They are sold in every state in the U.S.

10:24 – Josh answers a question about whether his business assumptions have changed since they started the business. He describes how it took them over two years to figure out their business model, and how they’ve become more data driven. He talks about getting to know their customers and to learn what they’re looking for. He talks about how they’ve used social media to identify product opportunities.

12:00 – Josh talks about how MakersKit started in San Francisco. They started doing fun do-it-yourself workshops on the weekends, which became popular. Then Google invited them to the Google Plex to do some projects. Google helped them create their first videos. MakersKit was published in a San Francisco Chronicle newspaper article, thereby being discovered by Macy’s (the retailer). This led to them being accepted into MakersKit’s first Techstars experience in New York.

21:05 – Josh talks about how they manufactured their product. They started in a studio in Los Angeles, then moved to a warehouse downtown Los Angeles. Then they moved to a third-party logistics company. They sought a manufacturing firm in the middle of the United States to keep shipping costs down. They had to find a partner that was excited about the product.

23:20 – Josh describes manufacturer partner challenges. He mentions that their biggest challenge is that MakersKit is based on the west coast, but the manufacturer is in the middle of the U.S. He describes that it can be frustrating because there’s a distance. But the benefits outweigh the costs.

24:40 – Josh talks about how they approached retailers to sell the product for the first time. They got their first big order from Macy’s based on a news story that Macy’s heard about. Josh talks about the importance of finding a way to “stand out” so that the buyer chooses your product to be sold in their store.

26:45 – Josh describes how they set the price of their product. He talks about the challenge of selling the product 50 percent off the retail price so the retailer gets the margin they need.

30:20 – Josh describes what motivated him to start a business. He talks about growing up in rural Missouri and mowing lawns for money as the start of knowing that he wanted to someday be a business owner. Additionally, being around friends that have started their own business was helpful for him.

32:05 – Josh describes his biggest joys of starting a business. He talks about the joy of seeing a direct impact on what they do, about bringing smiles to people’s faces. Additionally, he’s enjoyed working with a small team; it’s like a second family. They all live in the same apartment complex. He’s most proud of seeing their idea come to life.

33:27 – Josh talks about his biggest frustrations. He describes how their original ideas change based on customer feedback. He talks about how they had to learn that their customer base was different from what they expected. And adapting the business every day to serve customers needs.

34:21 – Josh talks about the self doubt that he occasionally experiences as an entrepreneur. He talks about learning from mistakes and going forward.

36:26 – Josh talks about what he’s learned most about himself. “Hard work pays off.”

37:56 – Josh talks about how his parents have been most influential to him. And what his parents think of him now that he’s an entrepreneur.

39:21 – Josh offers closing advice: he encourages listeners to go forward with their idea if they really believe in it, even in the face of naysayer criticism. “It is totally worth it, and I wish you all the best.”